Leading companies leave over half of consumer queries unanswered on digital channels. Despite the rising importance of multichannel customer experience, health insurers in the Asia Pacific region are still neglecting online channels, and are driving customers back to the phone.

Singapore, 6th August 2015 - Despite the rising importance of multichannel customer experience, health insurers in the Asia Pacific region are still neglecting online channels, and are driving customers back to the phone. The 2015 Eptica APAC Health Insurance Multichannel Customer Experience Study found that leading insurers only responded to 47% of questions asked on the web, email, Twitter and Facebook channels – and then provided successful answers in just 9% of cases.This forces consumers to send follow up interactions or make contact by other channels, damaging the customer relationship and adding to costs for companies. 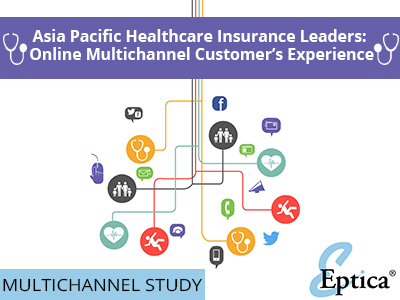 The research, which surveyed 10 leading health insurers on how they handled common consumer questions, found an overwhelming focus on the telephone channel. 58% of responses on email and social media from companies asked customers for their phone number or for them to call the insurer. There was also little consistency between channels – 60% of companies failed to provide similar responses on more than one channel, either because they did not reply on email, Twitter and Facebook, or gave different answers.

Comparing channels, company websites were the most accurate method of getting information, but still only answered 41% of questions. This masked major differences in performance – one insurer scored 57%, yet another managed just 14%. Most answers were found through static Frequently Asked Questions (50%) or keyword searches (40%), with just 20% provided through self-service systems that enable companies to better understand questions and deliver tailored responses.

Even though 90% of companies advertised email addresses or provided web forms on their site, insurers could only answer 20% of questions asked through this channel. Given that 60% responded, this shows that accuracy needs to improve to avoid customer dissatisfaction. Speed of reply also varied considerably – one insurer answered in 11 minutes, yet another took five working days. 30% took more than three days to respond, although 20% replied within 24 hours.

Social media also showed worrying gaps between what was offered and actual performance. While 100% of insurers had a Facebook account, and 70% responded to a message, none were able to answer the basic question asked. On Twitter, performance was marginally better – 20% responded, and 50% provided an accurate answer. While replies on social media were fast (84 minutes on Facebook and 77 minutes for Twitter), insurers need to invest more to provide agents with the knowledge to deliver successful answers on these channels.

“The 2015 Eptica APAC Health Insurance Multichannel Customer Experience Study shows that health insurers have got a long way to go before they can describe themselves as truly multichannel,” said David Chew, APAC Sales Director, Eptica. “While the majority offer customers the chance to contact them through the web, email and social media, their failure to answer basic questions, and overall lack of consistency point to a need to change how they operate if they are to connect to today’s multichannel consumer. The market is growing fast, and insurers need to embrace digital channels if they are to benefit from the opportunity.”

The private health insurance market is expanding rapidly in Asia Pacific, driven by a rise in average incomes and growing gaps between customer needs and government subsidized insurance. For example, according to Ernst & Young, in India only 15% of the population is covered by government schemes – yet currently private health insurance makes up just 2.2% of the market, showing that there is enormous room for growth.

Other key findings from the research included:

A management report containing the full findings of the Eptica study, along with the methodology and recommendations to improve performance can be downloaded here.