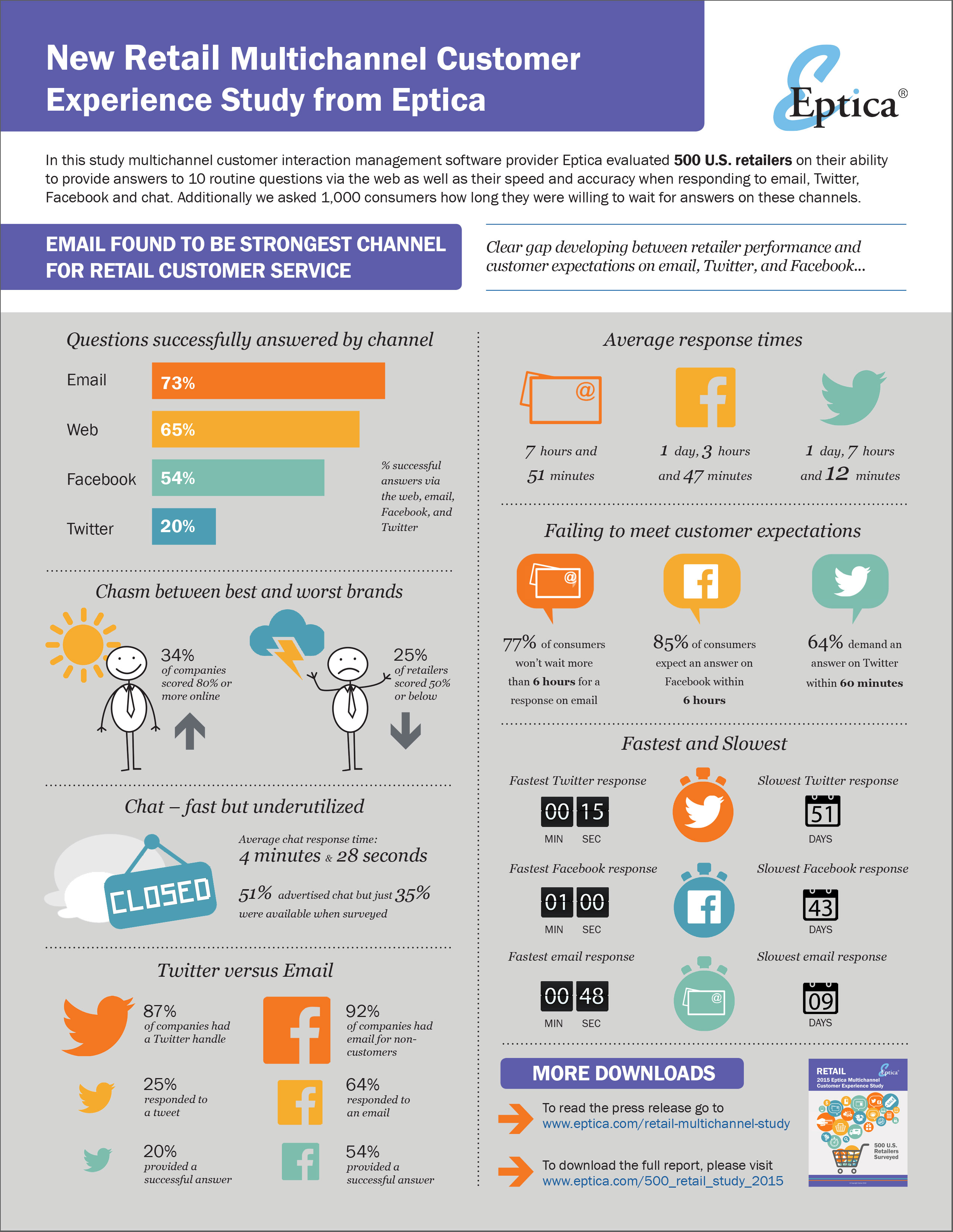 Released today, the 2015 Eptica Retail Multichannel Customer Experience Study evaluated 500 U.S. retailers on their ability to provide answers to routine questions via email, the web, chat, Facebook and Twitter. Additionally, 1,000 consumers were polled on how long they were willing to wait for responses on these channels.

Retailers surveyed could only answer 20% of questions sent via Twitter and 54% of Facebook messages - in contrast, they replied successfully to nearly three quarters (73%) of emails received. Only around two thirds (65%) of answers to routine questions could be found on company websites.

Email responses were over 3 times faster on average than social media but there was a clear gap between retailer performance and consumer expectations. 58% of consumers would like to receive an email reply within 2 hours, yet the average response time was 7 hours and 51 minutes.

“For me the Eptica Study proved that, for many retailers, customer service is just talk – or actually lack of it,” said Shep Hyken, customer experience expert and writer of the 2015 Eptica Retail Multichannel Customer Experience Study’s foreword. “Don’t promise me great service and then take hours to respond to my requests, if you respond at all. The best companies get it, respecting their customers and their time – these are likely to be the winners in the competitive retail market.”

The 2015 Eptica Retail Multichannel Customer Experience Study evaluated 500 of the biggest U.S. retailers. It studied those companies ranked between 500-1000, according to turnover, by theTop500Guide.com. For them delivering excellent customer experience is crucial if they are to challenge larger players. The Study measured their ability to provide answers to 10 routine questions via the web, as well as their speed and accuracy when responding to email, Twitter, Facebook and chat. Questions were deliberately similar to those that consumers ask, such as around next day delivery, returns policies and order tracking.

There were enormous gaps in performance. For example, four retailers responded on Facebook in 1 minute – yet another four took over 20 days, with the slowest finally replying after 51 days. And that question concerned next day delivery! On the web, one Specialty retailer answered 100% of questions – yet another managed only 10%. 95% of companies in the Flowers/Gifts sector successfully answered an email question, compared to 50% of Automotive Accessories retailers.

“The Eptica Retail Multichannel Customer Experience Study has uncovered a chasm between the best and worst when it comes to retail customer service,” said Olivier Njamfa, CEO and Co-founder of Eptica. “Some companies are delivering stellar service, yet others are unable to deliver the multichannel performance that customers expect and demand. It is therefore vital that laggards learn from their peers if they want to retain customers and thrive moving forward.”

Customer service on chat was fast, yet frustrating. Responses were extremely quick (on average taking 4 minutes and 28 seconds) but only 35% of retailers were able to respond on the channel – despite 51% advertising it on their websites. Retailers must have the agents in place to staff chat sessions, if they are to engage with consumers efficiently.

The Study also measured cross-channel. Only 14% of retailers delivered similar responses to the same question across 4 or more channels and 33% were completely inconsistent, showing a failure to join-up the customer experience and make it seamless. 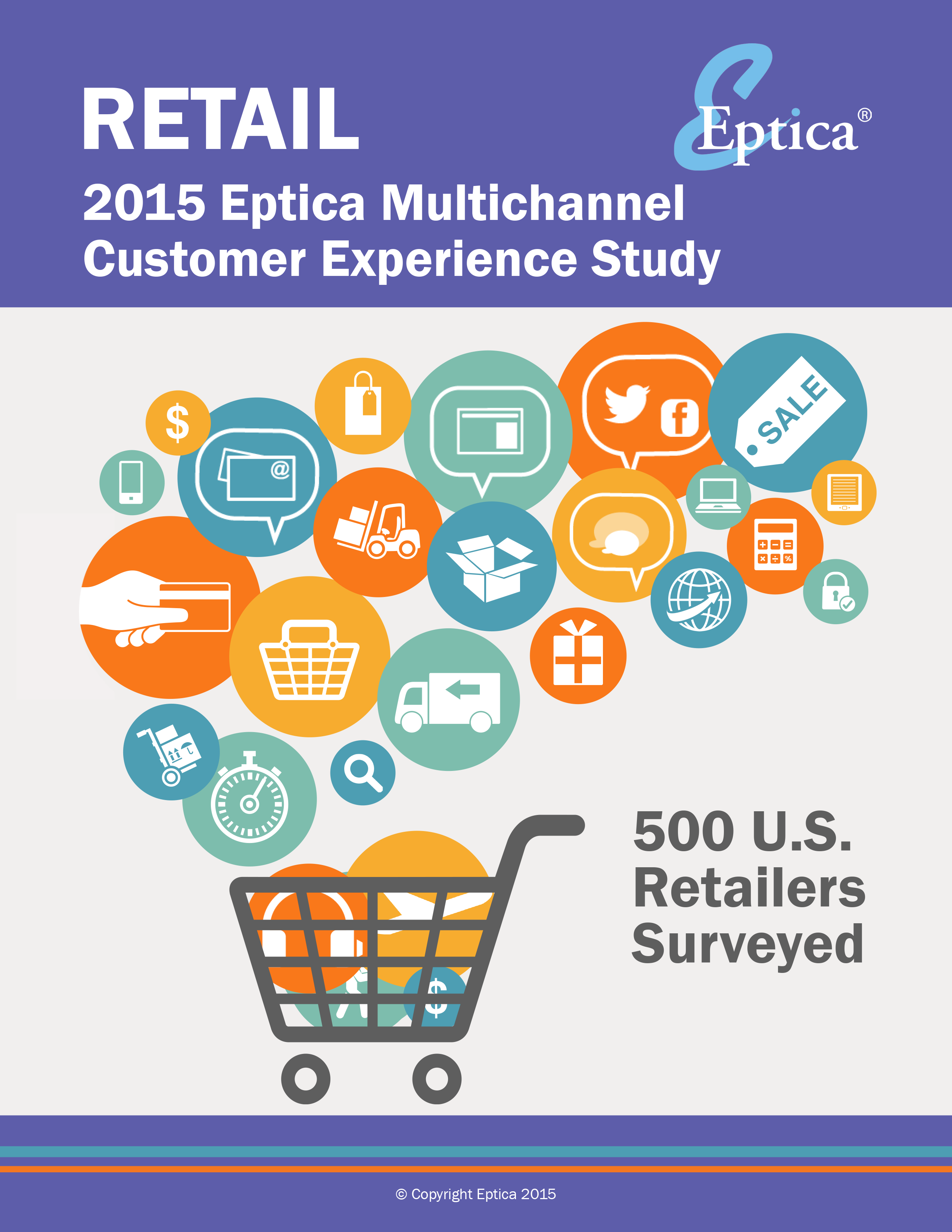 In total 500 company websites across 15 different retail sectors were evaluated in Q3 2015:

Consumer research on channel expectations was conducted by Toluna with 1,000 American shoppers in October 2015.

The full 2015 Eptica Retail Multichannel Customer Experience Study, which includes a full listing of companies evaluated, a detailed sector by sector breakdown of performance and full analysis, can be downloaded from http://www.eptica.com/500_retail_study_2015.

An infographic illustrating the results is available from: