Reading, UK, 7 June 2017, 91% of consumers say good digital customer service from insurers makes them more loyal – yet the UK’s leading insurance companies fail to accurately answer more than two thirds (68%) of routine questions asked through the web, email, Twitter and Facebook. In 2016 the figure was 47%, showing a dramatic decline in performance over the last 12 months. No wonder that just 15% of consumers are happier with the insurance customer experience compared to 5 years ago. 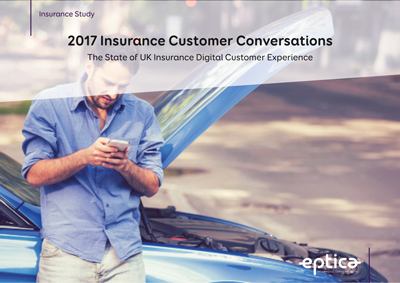 UK insurers are failing to meet rising customer expectations, according to the 2017 Eptica Insurance Conversation Study. Building on research carried out since 2011, the Study surveyed 20 home and car insurers by analysing their responses to routine questions asked via the web, email, social media and chat, looking at criteria including speed, relevance, context, personalisation and empathy. The study also surveyed 1,000 consumers to find out if their customer experience needs are being met by insurers.

Showing the gap between expectations and reality 78% of consumers said they wanted to be able to switch between channels when talking to insurers – but none of the companies surveyed could answer on all four channels of email, chat, Twitter and Facebook. Many gave completely different responses on each channel, showing a worrying lack of consistency in a regulated industry. Only 5% had answers that matched on 3 channels while 70% of insurers were completely inconsistent, with no matching answers across any channels.

Two bright spots were improvements on the web and chat. Answers to 52% of questions could be found on insurance company websites, up from 40% in 2015, while the number of insurers having chat available trebled since 2016, with 15% offering the service. However despite this progress there is still work to do on both channels – 48% of questions could not be answered on the web, and 85% of insurers did not have chat.

"Our research shows a growing gap between what consumers expect from insurers and what they are offered when it comes to the digital customer experience,” said Olivier Njamfa, CEO and Co-founder of Eptica. “Consumers want to have high quality conversations with insurers and 72% said that their expectations are continually rising – yet in the majority of cases they are simply not receiving the experience they demand. Performance seems to be polarising, with some companies and channels pulling away from the rest – meaning that the laggards risk losing customers to their rivals unless they change how they operate."

Increasingly consumers are looking for more meaningful responses when talking to insurers. 28% listed context as the most important factor when having a conversation with a company, ahead of empathy (27%) and personalisation (24%). They expect speed and relevance as standard, according to the research.

For those looking for accurate, fast answers to their queries, social media led the way over email – although all three channels deteriorated compared to 2016. 30% of questions received an accurate response on Facebook (down from 40% last year), 25% on Twitter (from 50%) and just 23% on email (down from 80%). Many insurers seem to have switched off email for non-customers, making it difficult to gain basic information through this channel.

Response times also worsened – on average it took 40 hours 25 minutes to get an answer on email (up from 28 hours 4 minutes in 2016), 49 minutes on Twitter and 3 hours 45 minutes on Facebook. These are generally far outside what consumers expect – 44% said they wanted an answer on Facebook in 30 minutes, and 62% on email within 2 hours. Just 10% of companies met this deadline.

The full findings of the research are available in the 2017 Eptica Insurance Conversation Study (PDF).

The study consisted of two parts. Firstly, it analysed the speed, relevance and quality of how 20 UK insurers responded to routine customer queries via the web, email, chat, Facebook and Twitter. Secondly a survey of 1,000 UK consumers was carried out via Toluna to measure their expectations and satisfaction levels with digital insurance customer experience. All research was carried out in May 2017.