The full findings, highlighting how the retail sector performed within the Eptica Multichannel Customer Experience Study, along with recommendations for areas to focus on, are available in the Eptica Retail Guide, which can be downloaded here. 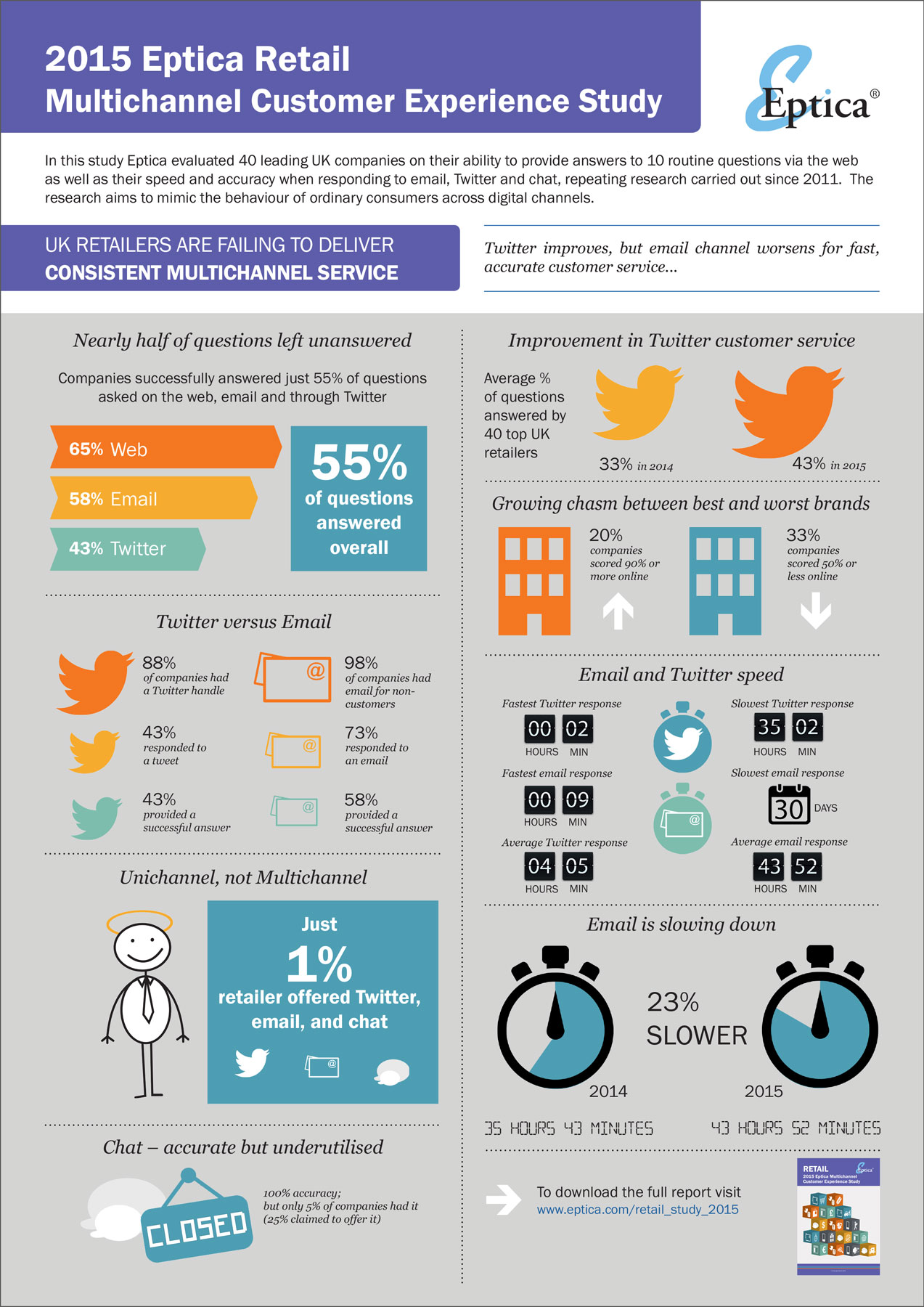 Reading, 19 March 2015, Despite significant investment in digital channels, UK retailers are still only answering just over half (55%) of routine customer questions asked via the email, Twitter and web channels. According to the 2015 Eptica Multichannel Customer Experience Study, email performance has worsened considerably in retail since 2014, both in accuracy and speed of response, while Twitter has improved dramatically over the last 12 months.

The average time taken to answer questions sent by email has increased by over 8 hours to 43 hours 52 minutes between 2014 and 2015, while the percentage of retailers successfully answering a query sent via email dropped from 63% to 58%. In contrast, tweets were answered in an average of 4 hours 5 minutes, over twice as fast as 2014’s 13 hours 10 minutes. Only 43% of tweets received a successful reply, although this was 10% higher than 2014. The web remains the strongest channel for customer service in retail, with 65% of answers to queries being found on company websites.

The Eptica Study, carried out by multichannel customer interaction management software provider Eptica, evaluated 40 leading UK retailers, split between 4 sectors (food & wine, consumer electronics, entertainment and fashion). Repeating research carried out since 2011, it replicated consumer behaviour by measuring them on their ability to provide answers to ten routine questions via the web as well as their speed and accuracy when responding to email, Twitter and web chat. 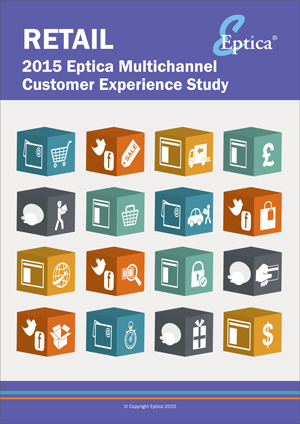 As well as retailers, the Eptica Study also evaluated businesses in six other sectors (banking, utilities, telecoms, electronics manufacturers, travel companies and insurers). Retail consistently outscored the overall average of all ten sectors on the email, Twitter and web channels. Across the entire study only 39% of emails were answered successfully, compared to 58% by retailers, with accurate Twitter responses for the four retail sectors (43%) 2% higher than the overall average of 41%.

“With ecommerce sales breaking the £100 billion mark in 2014, digital channels are now central to the success of retailers, whatever sector they are in,” said Julian Sammells, Sales Director UK & Ireland, Eptica. “Unfortunately the 2015 Eptica Multichannel Customer Experience Study found that there has been little improvement in how retailers are performing compared to 2014, with a major drop in email speed and wider gaps between best and worst. Retailers need to evaluate how they are performing for digital customer service and invest accordingly to ensure they are ready for the future demands of Christmas 2015.”

Retailer performance on email demonstrated that too many suffer from inadequate resources or broken processes. 98% provided consumers with the ability to email them but then under three quarters (73%) answered messages sent to them. 15% provided a response that didn’t answer the question, meaning that only 58% of queries were successfully responded to. Additionally, there were big differences between individual sectors and the retailers within them – electronics retailers answered 80% of emails, while entertainment retailers managed just 40%. One retailer successfully answered an emailed question in 9 minutes yet another took over 30 days.

While it saw improvements, Twitter also suffered from gaps between what was offered and actual performance. 88% of retailers were on the social network yet only 43% successfully responded to a tweet. 45% simply did not answer, suggesting that insufficient resources have been put in place to cope with the growing demands of the channel. Again, there was a wide range of response times – two food and drink retailers answered in 2 minutes, while a fashion retailer took over 35 hours to reply to a tweet. The entertainment sector responded to just 10% of tweets, while electronics retailers answered 60%.

On the web, retail saw a 5% advance in performance since last year, answering 65% of questions. While fashion retail, which has topped the overall study for the past three years, dropped behind banking, it still provided answers to 78% of questions. Entertainment again brought up the rear, scoring just 52%, exactly the same as in 2014.

The final channel surveyed was chat. While 25% of retailers claimed to offer it, just 5% of companies had this working when tested, down from 8% in 2014. All retailers with chat successfully answered the query raised with them, although the average time of the session increased from 4 minutes in 2014 to 5 minutes 30 in 2015.

“Today’s retail market is incredibly competitive, and customer service is a key way of differentiating and increasing loyalty and sales,” said Olivier Njamfa, CEO and co-founder, Eptica. “Consumers want a seamless, straightforward experience, yet the Eptica study found that too many companies are making it difficult to get answers to even the most basic questions across digital channels. Retailers that fail to improve are likely to lose customers to their rivals unless they focus on improving the experience they offer.”

The full findings, highlighting how the retail sector performed within the Eptica Multichannel Customer Experience Study, along with recommendations for areas to focus on, are available in the Eptica Retail Guide, which can be downloaded here. An infographic is available here.

2. On the speed and accuracy of their response via their email channel

3. On the speed and accuracy of their response to a directly tweeted question

4. For their ability to answer a question through web chat (if offered)

5. On the consistency of response across digital channels (email, Twitter and web chat)