Half of customer questions left unanswered, according to new multichannel study 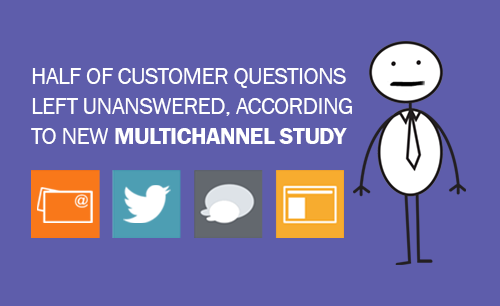 Over the past four years Eptica has been benchmarking the UK customer experience by evaluating 100 leading brands on their ability to provide answers to routine questions via the web, email, Twitter and web chat.

Against a background of ever-more demanding consumers, the 2015 Eptica Multichannel Customer Experience Study has just been released – and it found a growing gap in customer service levels between the best and worst companies. Speed has improved, but too many companies are failing to provide a consistent answer across multiple channels, and far too many questions simply don’t receive a reply at all. You can see the headline results as an infographic here.

1. The web is the primary digital channel for customer service
In 2012 companies could only answer just over half (53%) of questions asked online. This has improved to 64% in 2015, making company websites the best place to find answers to common questions. Where there was major improvement, the greater use of web self-service systems played a significant role. 90% of banks had deployed web self-service – and they answered an average 91% of questions successfully. 40% of insurers used web self-service – and they could only provide answers to 4 out of 10 questions on average.

2. Email sees improvements in speed and availability
In 2015, there were cautious signs of improvement in email performance. More brands let non-customers email them, and average speed of answer halved from 61 hours 39 minutes to 29 hours 27 min. But while responses were faster, they were less likely to be accurate, with just 39% answering successfully, compared to 41% in 2014.

3. Twitter grows in importance
In 2014 Twitter customer service was fast, yet fragile. Performance improved this year with the chances of receiving an accurate answer growing, from 39% to 41%. Average speed also improved, by over three hours, dropping to 5 hours 27 minutes, from over 8.5 in 2014. However over a quarter (26%) of organisations failed to acknowledge or answer tweets at all.