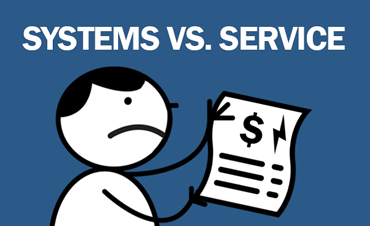 Earlier in the year I moved house and needed to change the existing energy supplier for the property. By the time all the paperwork was completed, I owed the old utility for a week’s energy. The bill arrived, and when I opened it I had a real shock. It was enormous – the company wanted to charge me $73,295.44 for just 7 days service!

Clearly, the billing computer had made a mistake, so I called customer service and explained the issue to a helpful agent. They agreed that the bill was obviously wrong and said they’d get it changed. So, the next bill arrives, and while it isn’t in the thousands, it is still $297.09– far too high for the energy consumed. I call back, and (another) helpful agent promises to sort it out. Finally, a third bill comes through my letterbox. This time it is for $16.24, a much more realistic amount.

Once I settled the account it got me thinking about the whole experience, and what it showed about how the utility was approaching customer service.

On the positive side, they had a great team of agents – as I said, every time I spoke to one I found they were friendly, helpful and completely understood my issue. I didn’t even have to wait long on the phone. So the customer service they provided was excellent – a 10 on the Net Promoter Score (NPS) scale.

The issue was that there was no connection between customer service and the rest of the business, particularly billing. Agents could request a new bill, but, as my experience proved, no-one checked if it was for a realistic amount, and it was sent automatically. Systems had overridden human interaction, damaging the overall experience.

I could understand that there might have been a technical failure that caused the first bill, but that doesn’t explain the second high bill – where did that figure come from? Given my experiences, I don’t necessarily trust that the third bill was correct either but, as it looked reasonable, I paid it. If you asked me for a NPS rating on the utility’s billing it would be a 1 or a 2.

There are three results of this disconnect:

1. Impact on corporate reputation
I was obviously leaving the utility, but its inability to issue an accurate bill doesn’t fill me with confidence about their operations. I simply don’t trust an organization that can make multiple billing mistakes in such as short space of time. So, when I next come to choose a supplier I’d be wary of picking them, given the experience I had. The fact that I’ve shared this story widely with family, friends and audiences at conferences mean that a lot of people’s opinion of the utility will have been affected. And this was without sharing my complaint on social media, where it would have potentially reached many thousands more.

2. Costs go up
Given the size of my first and subsequent bills, I wanted to talk to someone, in real-time, hence picking up the phone. Obviously from the utility’s point of view the telephone is the most expensive channel for customer service, so my multiple calls, as well as the repeated billing process, will have cost it a reasonable amount of money. Failing to resolve my issue first time around, despite the best efforts of the agents involved, decreased efficiency and increased the number of calls they had to handle. Bearing in mind that I was leaving anyway, this is a particularly unprofitable use of everyone’s time.

3. The problem doesn’t get fixed
The utility’s different departments and systems are obviously far from integrated, which probably means I wasn’t the only person to be affected by random bills. So the problem might be multiplied hundreds of times, with a greatly increased impact on corporate reputation and costs. Additionally, this disconnect is likely to mean that the underlying problem won’t be investigated or fixed, so it could happen again and again.

When it comes to customer service, we talk a lot about the importance of employing agents with the right skills and training them well. But, as my personal experience shows, if you fail to take customer service seriously across the whole organization, you’ll fail to deliver what consumers are looking for – no matter how helpful and skilled your agents are.