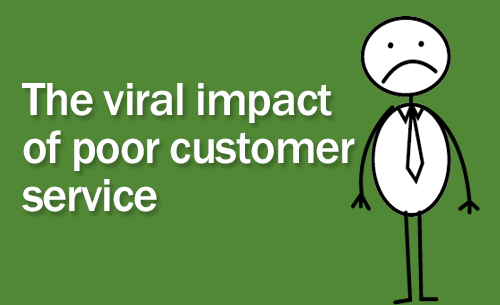 Social media has radically changed the relationship between customers and companies, tilting the balance of power towards the consumer. Poor experiences can now be transmitted around the world in seconds, hurting brand reputation and potential revenues.

US cable company Comcast is the latest business to find itself in the global spotlight, after a simple request from a customer to cancel his internet service turned into an 'epic harangue' from the agent, who refused to give up on persuading him to stay. A recording of the last 8 minutes of the 20 minute conversation has been heard to by an estimated 5 million people in just a few days, after it went viral via social media. You can listen to the call itself here.

Clearly, the customer service agent felt that he was doing his job, by trying to persuade the subscriber to stay, but his refusal to take no for an answer means that not only has Comcast lost one customer, but may potentially miss out on new subscribers, who decide to buy elsewhere. The company has since apologised for the agent’s behaviour and said it is investigating the incident.

Analysing the scenario, there are four lessons for every company to learn:

1. Put the right incentives in place

The agent was obviously incentivised to try and retain the customer, hence his increasingly desperate attempts to persuade them to stay. However, given it was obvious from the outset that he wanted to switch, the best course of action would have been to respond graciously and helpfully. That way there was the chance that the subscriber would come back to Comcast in the future. Incentives were obviously playing too much of a role in driving the wrong agent behaviour, and ended up being counter-productive.

2. Match staff to the right roles

One of the key skills a telephone agent requires is empathy – they need to demonstrate that they understand the customer point of view and take on board what they are saying. In this case the agent failed to take no for an answer or show any understanding of the caller’s situation. Some people have strong written skills, whereas others are more suited to verbal communication – match your staffs' abilities to the right roles for them.

It is classic business practice to make people cancel via a voice-based channel such as the telephone as it gives the opportunity to talk people out of their decision. However this has to be weighed against the annoyance and inconvenience it causes the customer – if you have to hold for a long time before being bullied into changing your mind, the customer service cost can outrank the retention gain. So offer multiple channels to make contact by, rather than forcing people onto the phone.

4. Remember the power of social media

A few years ago a conversation such as this would have been shared with family and friends. Now it is simple to record, disseminate and spread around the world, with coverage on major news sites and social media. Companies need to ensure that if the worst does happen, and a customer issue spreads rapidly, that they have the ability to monitor conversations and respond quickly before major damage is done.

When it comes to a customer service interaction going wrong, Comcast is not alone - there may well be thousands of similar issues at other companies that don’t make the same splash. This means organisations need to put in place the practices, systems and training to make sure that they both guard against giving poor service and also act swiftly to apologise for mistakes before they escalate further.